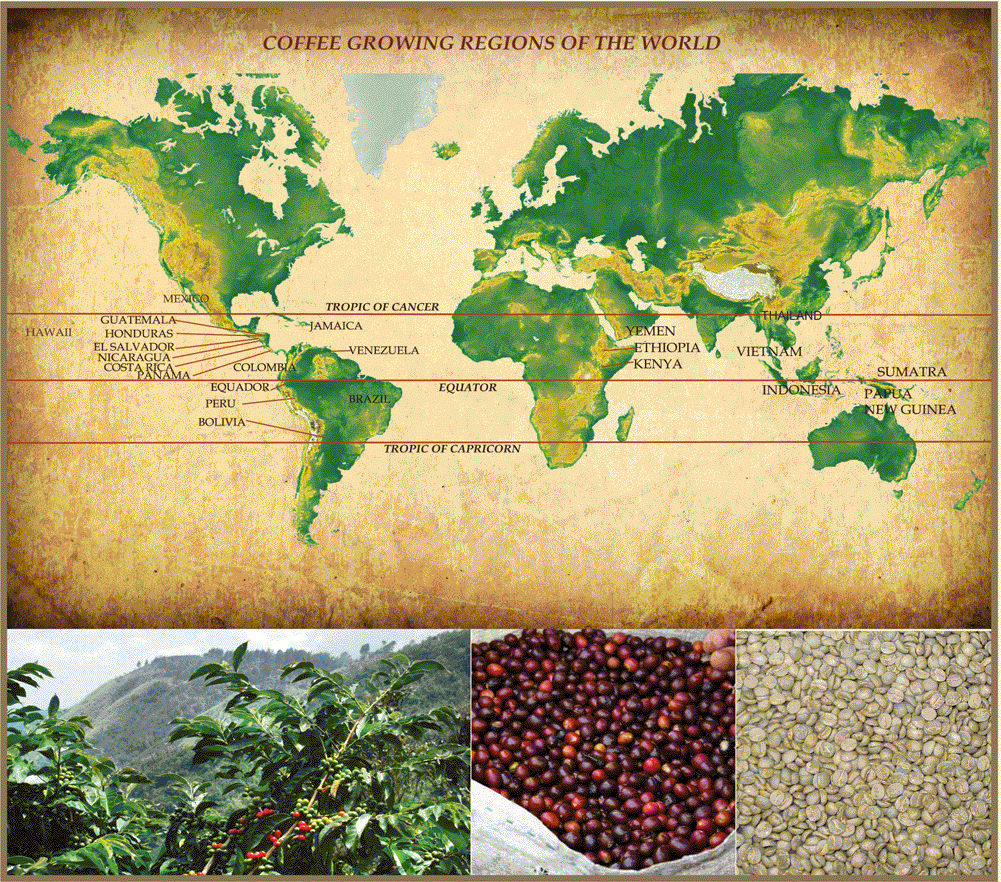 History of coffee in the world

The origin coffee is a native plant of Yacconia (Abysi Aa) and Arabia. It was found in the 6th century around 575 in Arabia and at the same time some He said that coffee is a native plant found in Kata, a province of Ethiopa. Therefore, coffee has been called by this province and is still called differently. The original of the coffee comes from This drug, Xenia or the Mian, or the East Arabian country in the middle of that period, had no one to pay attention until until the 9th century. Kold.) Take the goat to feed as usual. The goat eats a kind of red fruit and then causes a strange frenzy. He then brings the story to Buddha Image. One Muslim listens to him and therefore brings the fruit of the tree Used to chop milk, take the seeds to roast and then boil in hot water to drink, seeing that there is a sense of sweetness, so bring it to tell others to hear Increased from the Arabian countries into Italy, the Netherlands, Germany, France, Saudi Arabia, called "Tarah" (Kawah) or "Kawah" (Kawah), which means strength or weakness Reed (iger) Called "Kevat". Later, the name of the coffee has changed according to the various sources of the world, such as Koffee in England, called "Coffee" (coffet). Used today, when it comes to Thailand, Thai people called Goi, the people spread and finally coffee.

History of coffee in Thailand

Knowing the history of coffee in the world, you should be aware of the history of coffee in Thailand, white coffee, white coffee, or coffee, until the coffee shop (Cafe). ) Is a language that the ears and people are familiar with Thai people. At this time, coffee in Thailand originates from a Thai person who is a Muslim named Mr. Dee Rot has a chance to go on pilgrimage at Mecca, Saudi Arabia. Brought the coffee seeds to plant at the gates Ban Ban Nok. Saba Yoi, Songkhla Province In the year 1904, the coffee that appeared to be a Robubta variety, yielded good results. Then, it was propagated and promoted. Robusta coffee is widely distributed in the southern part of Thailand. It is promoted as an alternating plant in the rubber plantation as a reserve of rubber tapping. At present, the development of coffee in the southern region has many developments that can be grown. Is a plant The total area of ​​about 147, 647. For Arabica coffee (c Arabica), which is the main coffee species and has about 80 percent of the world's production, has been planted in Thailand, about year Prof. 1940, according to the records of Phra Sarasart Pholkhan, who was an Italian citizen in the year Fri. 2516, ThaiBun Mountain Replanting and Economic Development Project, initiated a variety of agricultural experimentation projects with the main objective of finding plants and animals to replace planting and producing drugs. And to develop the economy of the hill tribe people as well. In 1977, the project has been extended for another 5 years by changing the name to a high-yielding replacement and marketing project. This is the result of the experiment using many plants to replace the reluctance which has good results. The amount of dream production has decreased considerably in the promotion of replacement crops. This type of barbic coffee is one of the most important and hopeful of opium substitutes and can be made of gases. As well as the hill tribe population, which is due to the high level of suitable conditions and demand in the market